If you missed the livestream event on October 15, you can still buy a ticket to watch the environmental film festival on demand October 16 – 20 at 11:59 PM. Buy your tickets now! 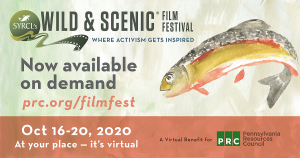 “PRC is excited to present the Wild & Scenic Film Festival for a sixth consecutive year with an exciting new format this year that enables us to reach film fans living throughout Pennsylvania,” says PRC Environmental Coordinator Stacy Albin.  “This online, virtual event features a series of thought-provoking and breathtaking local and national short films exploring the protection and restoration of wild lands and waters, food systems, climate change, biodiversity, litter prevention and other global issues.”

In addition to showcasing the nation’s premier environmental and adventure film festival presented by South Yuba River Citizens League, the 90-minute virtual event places two Pennsylvania films in the spotlight:  “The Air That We Breathe” by WQED Pittsburgh and “Saving Cherry Valley” by Open Space Institute.

ABOUT THE “WILD & SCENIC FILM FESTIVAL” Initially a project of SYRCL (South Yuba River Citizens League), the annual Wild & Scenic Film Festival works to combine beautiful and moving filmmaking and environmental issues to inspire citizens across the nation to protect the environment and take action for local and global communities.  Since 2003, the SYRCL has partnered with a diverse array of environmental nonprofits to bring the festival to communities across the nation, creating unique film festival experiences and using the festival to raise awareness of local environmental issues and raise funds to support the host organizations’ missions.